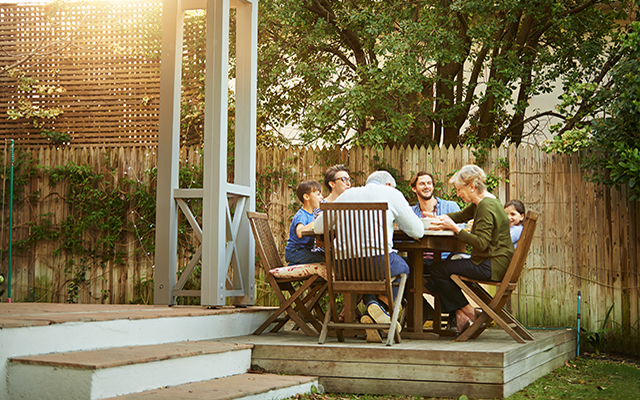 The Sundays of my 1950s youth often found me fidgeting in the back seat of our family’s car traveling far beyond our suburban Minneapolis home to visit grandparents out on the prairie: Grandma and Grandpa Winters one week, Grandma Cox the next. It didn’t occur to me at that time, of course, but this weekly excursion would be a product of a vaguely articulated social revolution. The extended family was falling apart.

Born and raised on central Minnesota farms, my parents had settled following the war in what their parents derisively called “The Cities,” leaving my grandparents to mostly look after themselves. Mom and Dad were hardly alone in this declaration of freedom. Millions of young married people migrated to the booming postwar suburbs while loosening their ties to the multigenerational family structures they’d known as kids. By 1960, David Brooks notes in The Atlantic, nearly eight out of 10 American children endured their married parents, away from their extended family.

The allure of the nuclear family, Brooks explains, was obvious to anyone who had grown up surrounded by parents, grandparents, uncles, aunts, and a lot of siblings. “While extended families have strengths, they are able to also be exhausting and stifling,” he writes. “They permit little privacy; you are instructed to be in daily intimate connection with people you didn’t choose. There’s more stability but less mobility. Family bonds are thicker, but individual choice is diminished. You have less space to create your own way in life.”

The rise of the nuclear family, however, exacted a stiff toll around the elderly, who could no longer count on the daily support of a close-knit clan in times of crisis. In my great-grandfather’s time, three out of four seniors lived with relatives; when my son was created in 1990, that number had fallen to less than two in 10. It’s hardly surprising that about a third of the Medicare set now struggles amid a crisis of loneliness.

This all hit home for me personally the other day while reading an item in the New York Times profiling a few companies offering “grandkids on demand” to lonely seniors. Before the pandemic forced shelter-in-place rules, these paid companions spent a few hours a week hanging out with their elderly clients — playing cards, watching movies, or just chatting. Nowadays, they’re running errands, driving them to doctor appointments, and speaking with them on the phone.

It’s a life-saving service on many levels, says Tanya Martin, whose job and parenting responsibilities have limited her ability to care for her 91-year-old grandfather, who lives nearby. “He doesn’t need medical care — he needs another me,” she explains. “There’s not one other option. This saved my home, saved my career.”

For its promise of freedom, the nuclear family has painted many of us into a corner, Brooks suggests. We’ve dwindle flexible, less able to rise to the occasion when a family crisis emerges. As well as in a rapidly aging society, we’re discovering that a social structure made to liberate us has instead become a constraint.

In fact, Brooks argues, the nuclear family was always something of the anomaly. “We take it as the norm, even if this wasn’t the way most humans lived during the tens of thousands of years before 1950, also it isn’t the way most humans have lived during the 55 years since 1965,” he writes. “Today, only a minority of American households are traditional two-parent nuclear families and just one-third of American individuals live in this sort of family. That 1950 to 1965 window was not normal. It was a freakish historical moment when all of society conspired, wittingly and not, to obscure the essential fragility of the nuclear family.”

I observe that this is true when I take the time to look beyond our own quiet two-person domicile. Our daughter and her partner are holed up in the basement of her partner’s mom’s suburban rambler. When our son returns home come july 1st after his stint within the Marines, he’ll be joining — as he does whenever he’s on leave — his wife’s multigenerational, multiracial household, featuring two grandchildren, one high-schooler, three teenagers, as well as Mom and Dad. This should be working for our offspring; none of them are clamoring to bunk here around.

Of course, they probably know how we’d react to such a request. In desperate situations, we’d certainly take them in; I’d give up my upstairs office and that we could turn the den into another bedroom. But we’ve grown accustomed to a pretty tranquil, leisurely life. We tend to keep up with the dishes and mostly disregard the TV. We cherish our quiet evenings reading within the living room. Plus, we need an hour or two to decompress after a long afternoon with this grandson; who knows how we’d handle rubbing elbows having a gaggle of extended family 24/7?

We may be outliers among our geezer cohorts. Multigenerational housing models take presctiption the rise. Cohousing developments, in which residents of all ages maintain their own living space but share a kitchen and other common areas, are thriving. And homebuyers are increasingly looking for houses that include spaces for returning college graduates and elderly parents. In the past 30 years, Brooks notes, these options have gradually reintroduced the relatives into American culture while reducing the number of elderly living by themselves.

“We’ve left behind the nuclear family paradigm from 1955,” he writes. “For most people, it’s not coming back. Americans are hungering to live in extended and forged families, in ways that are new and ancient simultaneously.”

I’m pretty sure My Lovely Wife and that i will be bucking that trend for the foreseeable future. But that’s the thing about the future — it’s unforeseeable. At some point, the fates may conspire to insist that people share our humble abode with a lively band of housemates. I suspect we’d eventually adapt, but we’d definitely need to come to some understanding about kitchen duties, and we’d have to negotiate some guidelines governing TV viewing. I wouldn’t wish to have to hide the remote.